Heinz-Peter Schepp is born in Duisburg on 06.08.1960. He's current residence is in Cologne.

It all started quite innocently, with a Nikon FE2. That was back in 1984.

Since then it's become an obsession, an addiction. And I've become a

one-of-a-kind images. Always inspired by street photography and the desire

to perhaps – one day – create pictures worthy of comparison

with those of Gyula Halász (Brassaï). 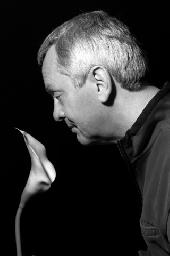